Rave-Elation was originally written for performance by the combined forces of Camerata Australia and Camerata Scotland.  It uses aspects of popular music as a starting point, in particular that of the ‘techno’ music genre. The piece is almost exclusively hedonistic in content, and this is deliberate. The main inspiration for the work comes from dance and ‘rave’ parties, especially the party-goers’ single-minded indulgence in physical enjoyment.

‘Rave’ parties are large dance events, popular in the 1990s where the music is loud, produced through loud amplifiers.  A steady drum beat, simulated and at times reproduced in Rave-Elation by a MIDI drum kit, controls the tempo and the excitement of the dancing crowd. The tempo and beat of Rave-Elation reflect the popular fast mood of this ‘dance’ music.

Originally commissioned by Youth Music Australia, Rave-Elation was written with the financial support of the Australia Council, the Australian government’s arts funding and advisory body. This arrangement of Rave-Elation was commissioned by Musiktheater im Revier. The first performance was given by Ballett Schindowski, with the Neue Philharmonie NRW and Bernhard Stengel, in Gelsenkirchen (Germany), for their all-Hindson ballet “Veitstanz” choreographed by Bernd Schindowski, on 24 January 2004. 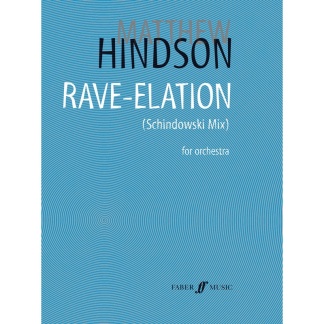