The Gilded Theatre was commissioned by the National Youth Wind Orchestra of Great Britain on the occasion of its fortieth anniversary. They gave the first performance on 10th August 2008, at St. John’s Smith Square, London conducted by James Gourlay.

The Gilded Theatre can, in some ways, be seen as a continuation of dramatic forms as presented in a previous piece by Hesketh, Diaghilev Dances. Unlike the Dances, however the music in The Gilded Theatre is conceived as one continuous span and stretches of music are also subtitled and refer to stock characters or scenarios redolent of the commedia dell’arte or 17th Century French Theatre.The subtitles are Rideau, Les Idiots Ou Les Amants, Le Combat Commence, Desespoir, L’apparition, Folie, La Mort, Rideau.

The music narative progresses through dramatic, comedic, romantic and aggressive moods supporting the idea of the abstract play to which the the above subtitles refer. Throughout the piece the composer has sought to challenge the players both technically and emotionally, and it is the players themselves who are in fact the protagonists in the piece. 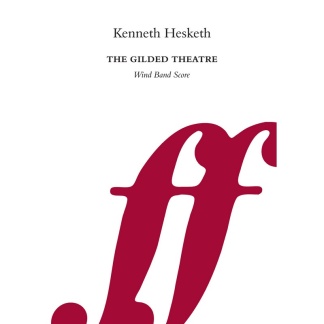 You're viewing: Hesketh, Kenneth : The Gilded Theatre £19.99
Add to basket