80 Graded Studies for Saxophone Book Two is a direct continuation of the first book, designed to progress players to a late intermediate level (Grades 6-8). It concentrates on a number of techniques such as tone quality, dynamics, intonation, articulation, finger technique and playing in character. The wide variety of styles also encourages young players to pay attention to expression and fosters a musical understanding in the young saxophonist.

80 Graded Studies for Saxophone, selected and edited by John Davies and Paul Harris for both Alto and Tenor Saxophones, brings together in two books a broad selection of 18th and 19th century repertory, with studies by Arban, Baermenn, Blatt, Brod and others. Also included are a number of specially composed studies by Paul Harris. These introduce aspects of 20th-century style and considerably extend the scope of the selection. The studies are arranged in order of increasing difficulty, according to a carefully planned technical progression.

Studies are an established part of every instrumentalist’s training. They place technical problems in musical contexts, and can be invaluable aids to development. 80 Graded Studies for Saxophone is a must-have resource for all students and teachers, and the two books feature heavily on the major examination board syllabuses. 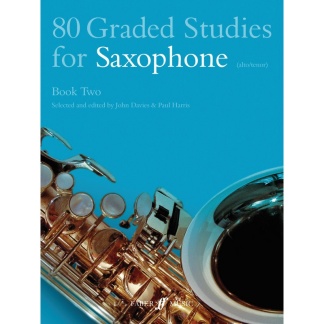