for brass quintet (2 trumpets, horn, trombone, tuba) A work in five movements, each characterizing a poem by Chaucer. ‘Triton’s Trumpets’, acts as an overture to the suite of pieces, is mainly rather rustic and, as its title implies, much of its music is in the nature of fanfares. Next is a haunting slow waltz, then a very short and very vigorous fanfare. In the fourth movement, ‘The Sorrowful Knight’, each instrument expresses its individual sorrow. Finally Chaucer himself chatters in a jaunty, innocent style.

Triton’s Trumpets; The Grieving Queen; A Fanfare for the Huntsmen; The Sorrowful Knight; The Wakeful Poet 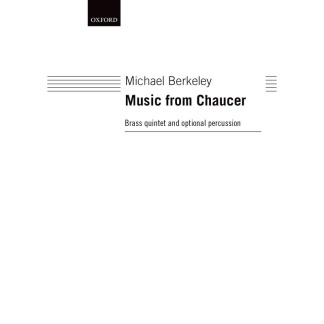 You're viewing: Berkeley, Michael: Music from Chaucer £38.85
Add to basket